Nehemiah Persoff sadly passed away last month at the age of 102, but with 207 credits listed on IMDB, there’s a reason why it felt like he was always on TV for about a thirty year span. Pretty impressive when you consider that he never had a regular or recurring role on any series. Maybe best known for his role in Yentl, Mr. Persoff left his mark on many TV shows during his career.

He did multiple episodes of Hawaii Five-O, but his turn as the unpleasant Harry Cardonus, the weak-link in a criminal organization that McGarrett manipulates in order to get him to testify, really stands out. While under police protection, his attitude towards Steve McGarrett, Five-O, and HPD makes you wonder if Steve won’t kill him before his buddy does. He’s unlikable from the beginning, but there’s enough character and humanity to him that makes him feel like a real, fully formed human and not just a plot device.

Mr. Persoff frequently played rabbis and other Jewish characters. His turn as Yakov Berger, a Hassidic Jew and diamond merchant on two episodes of Barney Miller (the closest he came to a recurring character) are fantastic. In the first episode, “Middle Age”, he’s the intended target of a theft. In the second episode, “Riot”, he along with other members of the Hassidic community take umbrage with the precinct’s lagging response times to calls to an extreme. Both episodes are quite funny, thanks in large part to Mr. Persoff’s performance. 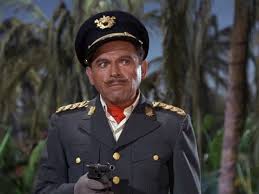 Most likely because of his olive complexion and his gift with accents, he was often cast as Middle Easterners or Latinos. His performance as Pancho Hernando Gonzalez Enriques Rodriguez in the Gilligan’s Island episode “The Little Dictator” is probably the best example of the latter.

A gifted, versatile actor, Mr. Persoff turned up on a wide variety of shows. Westerns like Wagon Train, Rawhide, The Big Valley, The Wild Wild West, The High Chaparral, and several episodes of Gunsmoke; Sci-Fi shows like The Twilight Zone (in a rather haunting episode called “Judgment Night”), Voyage to the Bottom of the Sea, Land of the Giants, The Time Tunnel, Logan’s Run, Battlestar Galactica, and Star Trek: The Next Generation; and family friendly fare like The Flying Nun, Little House on the Prairie, and Doogie Howser MD.

He ran the gamut of crime shows, from Honey West, Mannix, Richie Brockelman Private Eye, Vega$, and Magnum PI to The Untouchables, The Mod Squad, Adam-12, The Streets of San Francisco, Columbo, McCloud, and Police Woman to Burke’s Law, McMillan and Wife, Ellery Queen, Baretta, Quincey ME, Murder, She Wrote, LA Law, and Law and Order.

He checked in with Ben Casey, Marcus Welby MD, and Chicago Hope. He got spooky with Alfred Hitchcock Presents and Thriller. He courted intrigue with The Man from UNCLE, Mission: Impossible, and Search. He hung out with both The Six Million Dollar Man and The Bionic Woman; sided with Wonder Woman; helped out MacGyver; rode the Supertrain; and spent some time on Fantasy Island. He even has the distinction of guesting on two shows that shared the same name (but not the same premise) twice! I Spy (a series in 1955 and again in 1965) and Hunter (a series in 1976 and again in 1984).

Nehemiah Persoff was a talented man with an incredible range from the dramatic to the comedic and everything in between. And those talents can be regularly found on just about any rerun. It’s nice to know we can still find him any time we want to tune it.