I know I’ve talked about the music before, but now let’s focus on the show. After all, it’s the reason for the music anyway, right? At least in the beginning.

The premise was simple enough: four band members lived in a kickin’ beach pad and had wacky adventures while playing really catchy tunes that are still played to day. Most episodes got two songs and these were usually set to “romps” in which the boys and the guest starts ran around and acted silly. There were also given an excuse to play at least one number in many episodes.

The second season got a little crazier as the guys were more prone to imporve and more prone to smoking pot. There weren’t so much as script as there were guidelines to an epidsode and even tehn they were quite loose. The episodes, though a little stranger, were still fun.  “The Devil and Peter Tork”, “Fairy Tale”, and “The Monkees Christmas Show” remain to fan favorites. 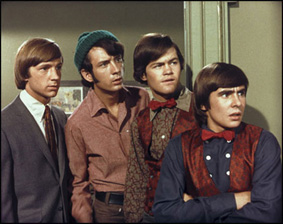 Peter, Mike, Micky, and Davy. Yes, I know what episode this is from.

The band was comprised of Davy, the cute one; Micky, the crazy one; Mike, the in-charge one; and Peter, the dumb one. Okay, that’s over-simplifying things a bit, but the point was there was a “type” for every girl (though the target girls ended up being 8-12). Davy was the teen idol heartthrob with a British accent bonus. Micky was as charming and funny with a good heart. Mike was the epitome of the strong, sarcastic Texan with a protective air. And Peter was sweet, sensitive, and a little naive, which made you want to protect him. I think every one of these guys has been my favorite at some point or another. I think they planned it that way. Very clever.

Sporadic reruns of the show have garnered new generations of fans. I got hooked when I was six during their 20th anniversary tour. Though I listen to the music almost daily (I’ve got all but 2 albums on my iPod and I will have those one day, oh yes), I still love watching the show, particularly when I need a mood boost. Most of the eps I have are on VHS. It’s the only reason I still have a VCR.

I can’t imagine a higher compliment than that.

Where I Watch It