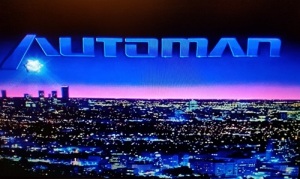 Automan is not a show I knew about until recently, coming across the title while doing research on something else. In November of 2017, Red Giant put out a short based on Automan that was written and directed by Aharon Rabinowitz and starring David Hewlett as the title character, Hewlogram. Between this hilarious short (please go watch it and the making-0f video because it’s just as much fun) and watching the opening for the actual series, I put this one on my to-watch list.

And as luck would have it, I received the series on DVD for my birthday.

(I also received Hewlogram poster that I won that same week. My 38th birthday week was lit in a hologram sort of way.)

Automan aired in 1983 for just 13 episodes. Starring Chuck Wagner as Automan, Desi Arnaz Jr. as his creater Walter Nebicher, Heather McNair as Roxanne Caldwell, Gerald S. O’Laughlin as Captain Boyd, Robert Lansing as Lt. Jack Curtis, and Cursor as himself. No, really. The little cursor thing got a credit.

If you bothered watching Hewlogram, then you’d have the basic premise of Automan. Walter Nebicher is a computer programmer and police officer whose captain prefers him in his little computer room and not out on the streets. He creates Automan, a hologram so powerful that it can hit a dude across a room. Only Walter’s co-worker and sort of love interest Roxanne knows that Automan is a hologram. Oh, and Cursor is a little firefly looking thing that can draw anything and make it real, like a suit over Automan’s Tron body or a super fast car. It’s also a bit of a perv. Because Automan requires a certain amount of power to exist, he sometimes has to disappear when he feels his battery getting low or find creative ways to recharge. All of this in the name of fighting crime.

The buddy cop duo we need and deserve.

The show only ran 13 episodes and that’s both criminal and totally understandable. In only 13 episodes, we had mobsters, tropical locations, corrupt cops, corrupt sheriffs, bikers, Laura Branigan, a male exotic dance club called Zippers, bombing threats, diamond smuggling, and I’m pretty sure every episode featured covers of popular songs of the time as well as the laughing freeze frame at the end. You can’t pack that much awesome into such a short run. The star that burns that brightly, burns out too soon.

It also suffers from the some questionable dialogue that boarders on painful, the obvious jokes and cheesiness that permeated the ’80s, and some less-than acting, though I blame the dialogue for a lot of it. Seriously, some of those lines are face-smackingly cringey.

But, it’s an incredibly fun show! Chuck Wagner is adorable as Automan. He embodies this hologram that is, in his own words, an eleven on a scale from one to ten while also being rather naive about the ways of humans. To help him learn about humans, Walter had Auto watch movies and TV shows. Auto inadvertently watching multiple episodes of a soap opera is a highlight.

Speaking of Walter, he’s not just an inept computer nerd. Yeah, in a few episodes things don’t go his way and he gets his ass handed to him, but he’s not incompetent. And he does get in his licks. He’s also not a total loser with the ladies. After all, Roxanne is one hot chick and he doesn’t seem to have any trouble with her.

Together, Walter and Auto are, well, maybe not unstoppable or unbeatable, but they get the job done and they’re entertaining. 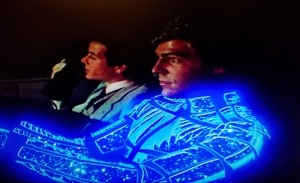 Giving a new meaning to the boys in blue.

The plots are typical ’80s grand with titles like “Staying Alive While Running a High Flashdance Fever”,  “Murder MTV”, “Murder, Take One”,  “Death By Design”, and “Club Ten”. In one episode called “Renegade Run”, you have Richard Lynch as a corrupt sheriff that pits him against biker Billy Drago. I know, right? How great is that? Pretty great.

Check out that crop. Nothing but cream.

Okay, Automan is a little on the silly side. It’s the early ’80s turned up to eleven. It is glorious.