I first remember coming across David Cassidy: Man Undercover when I was doing guest star research for Book ’em, Danno. As soon as I saw it, I knew I had to watch it. David Cassidy playing an undercover cop in the ’70s bridge between The Mod Squad and 21 Jump Street? Yes, please! It became one of my Holy Grail shows. It hasn’t been released on DVD, so streaming was my only hope.

I lucked out when it showed up on Crackle. The only hitch in the giddy-up? Episode 5 is missing for some reason (EDIT: Thanks to Gail for providing a link to Episode 5 in the comments). Missing an episode or two in a 200 episode show is no big deal (there are two eps of Hawaii Five-O I haven’t seen because they don’t get play in syndication, but one of them I’ll be able to watch thanks to streaming; bootleg is the only way I’ll ever see the lost episode); in a 10 episode short-lived series, it can be more significant. However, I think my binge watch of the nine available episodes is sufficient, at least for this little write-up.

As the title so expertly explains, David Cassidy plays undercover officer Dan Shay. He and his fellow undercover officers including Paul Sanchez (Michael A. Salcido) and T.J. Epps (Ray Vitte) answer to tough, loud, and supportive Sargent Abrams (Simon Oakland), while his wife Joanne (Wendy Rastattar) takes care of their daughter Cindy (Elizabeth Reddin), worries about his safety, and wonders if he’ll ever get to attend family events like a normal husband.

Every episode Dan Shay goes undercover as someone else named Dan (and I’m pretty sure every last name started with an S, but it might have just seemed that way) to infiltrate some sort of crime group and bring them down from the inside. Now, we’re talking about heartthrob David Cassidy here. Even four years after The Partridge Family, he was still something of a baby-faced hunk, which played in his favor for some undercover assignments and against him in others.

He was believable as a street racer, a college student in a baby-making scheme (yes, you read that right), and as a junkie. He was really good as the junkie, something you wouldn’t expect from such a normally clean-cut guy.

It was a stretch of believability when he went undercover as a pimp (yes), a motorcycle gang member, and an arms dealer. It’s no fault of his own. David Cassidy pulled off the acting, but when you put him next to another arms dealer played by James Whitmore Jr., the difference is glaring. He just didn’t have the right look.

Even if David Cassidy couldn’t always pull off the undercover assignments to my expectations, the episodes for the most part were decent to good. I particularly liked the twist of the college baby ring. Instead of coercing knocked up college girls to give their babies up for adoption to couples who could pay the huge fees, they solicited willing college students to make designer babies the old-fashioned way. Paying couples could flip through a book of headshots and pick the DNA they wanted. Then the chosen two would bow chicka wow wow their way to a baby and a payday. The problem was there was no take-backs and those who tried to back out of the deal were dealt with harshly. And that’s where Dan came in.

The episode in which Dan goes undercover as a junkie was also quite good, but more for the relationship that Dan established with another junkie. Sure, he used and manipulated him, but it was also clear that Dan cared about the man, too.

That’s the thing about the show. It’s very earnest. Dan is not only big on getting justice, but also on doing the right thing. The show humanizes addicts and sex workers, when most shows at the time still treated them as castoffs, undesirables, and garden variety criminals. That doesn’t stop them from playing Joanne as a petty, insecure wife when Dan is undercover as a pimp (I know) and working closely with a sex worker. Which is a shame because most of the time, their relationship is pretty grounded. She worries for him and gets frustrated with his work, but they also have silly, loving moments together that work really nicely to keep her from being a typical serious police wife.

I think the show would have benefited by keeping Dan’s undercover assignments toward his strengths of looking like a young, hip guy and/or derelict, juxtaposing that with his home life as a husband and father, but apparently, there’s more excitement in trying to convince us that Dan is a tough prison thug (I was not convinced; nothing to do with the acting, everything to do with the looks).

The show does tend dampen any climax peril for Dan. The only time I ever actually feared for him was when he was nearly molested in prison (which wasn’t the climax) and even then he quickly dispatched the offender. Most of the time the episodes wrap up pretty quickly and neatly with the bad guys not fighting back a whole lot. Sometimes it makes sense, but I expect James Whitmore Jr. not to go so quietly. 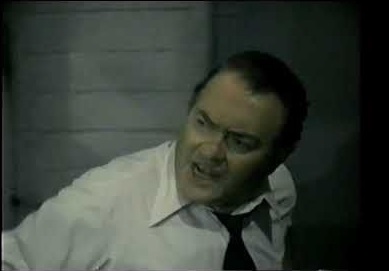 Even so, I enjoyed the show.