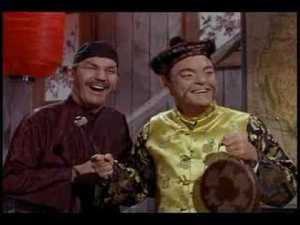 One of my favorite episodes of The Monkees is called “Monkees Chow Mein”. The four guys inadvertently intercept a fortune cookie filled with top secret information at a Chinese restaurant. The CIA get involved. BJ Hunnicutt is there. Hijinks ensue.

If you’re not familiar with Joey Forman let me assure you that he is a very funny man who is definitely not Chinese. His portrayal of Dragonman involved scotch-taped eyes and a stereotyped accent. It’s a somewhat less obnoxious version of yellow face, but there’s no doubt that it’s yellow face.

So, how can it be one of my favorite episodes? Two reasons. One, it’s funny and most of the humor in it could have been achieved just as successfully by Joey Forman (and his right hand man, Gene Dynarski) not doing yellow face. The lines and the antics would have been just as funny because it had nothing to do with the stereotype they were portraying.

Yes, I realize there’s a lot of privilege involved that it allows me to approach this episode from that angle.

And two, being a rerun junkie means that I’ve learned to accept that my favorites are going to be problematic.

It’s a simple matter of history, really. These shows are a product of their time, whatever their time is. That’s why you see a lot of racist casting (e.g. white people playing minorities) in the ’50s, ’60s, and even into the ’70s. The stereotypes continued all through the ’80s and beyond.  Misogyny and sexism has run rampant for decades, so it’s always available in reruns. To be fair, the shows can’t help it. And it’s far too late for them to change.

That’s not to say any of it is right, of course. These things might have been common then, but even at the time, folks had problems with it. Pernell Roberts reportedly objected to the racist stereotypes of the minorities on Bonanza. And Van Williams repeatedly tried to get Bruce Lee a bigger role on The Green Hornet, which the producers reportedly refused because they didn’t want to give too much focus to a non-white actor instead of the star.

So, when it comes to reruns, it’s a matter of acknowledging that at the time this was the practice. They’re time capsules of cringe-worthiness, syndicated reminders of our sketchy, shady, seedy TV past.

Even shows that did their best to be socially conscious (for their time) still stumbled. For example, Barney Miller often tackled topical 1970’s issues, some of which are still relevant today. And it largely succeeded in addressing those issues, at least in an illuminating sort of way. But there are some episodes that missed the mark and as a result have aged terribly. The episode “Rape” attempted to address the laws (or lack of laws) pertaining to marital rape. However, done in the confines of a 30-minute comedy…yeah. The tone-deafness only rings clearer as the years go by.

These are the landmines you risk as a rerun junkie. It can make for uncomfortable viewing and in some cases all of the logical rationale can’t save you from the oogy feelings. There are now episodes of my favorite shows that I avoid because I just can’t.

Retaining perspective is the key. It’s a good thing that these issues are noticed and that they cause discomfort. It’s a sign that things have progressed (somewhat) and that the old status quo has long spoiled.

Ideally, I’d like to do in-depth posts about the different issues that crop while rerun-watching.

But for now, I continue to come to terms with my problematic favorites.

One thought on “All of Your Favorites Are Problematic”